When a patient is injured due to the negligent care provided by a physician, there can be several parties responsible. Of course, the doctor providing the care is who immediately comes to mind, but medical malpractice lawsuits are most often brought against a number of defendants, including the doctor’s support staff, practice group, and even the hospital where the allegedly negligent care was provided. 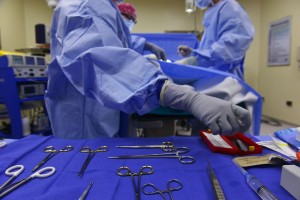 The liability of the parties other than the doctor are based on legal theories that hold employers responsible for the negligent acts of their employees while their employees are performing the functions of their job. There may also be a claim that the hospital was independently negligent due to a specific act or omission that took place surrounding the plaintiff’s care.

Under the applicable legal theory of joint and several liability, when multiple defendants are found to be liable in a medical malpractice case they are each liable to the plaintiff for the entire amount, up to the total amount of the verdict amount. This helps ensure that an injured plaintiff stands a fair chance to recover for the injuries recovered in case one or more parties are insolvent. Of course, if one party ends up footing the entire bill but were only partially at fault, that party may ask the court to receive compensation from the other negligent parties. This is called the doctrine of contribution.

Earlier this week, a Chicago family entered into a settlement with two local hospitals after a series of “experimental” surgeries left the young boy with a catastrophic brain injury. According to one news source reporting on the settlement, a single doctor performed all 24 of the surgeries in an attempt to repair a leak in the infant’s esophagus. However, during the final surgery in 2011, the doctor severed the boy’s pulmonary artery with a suturing device. As a result, the boy sustained permanent brain damage.

Evidently, the doctor was practicing at a university hospital for the early procedures. However, the surgery resulting in the severed pulmonary artery occurred at a separate hospital. The university hospital agreed to pay $10 million to the boy’s family, while the other hospital paid $20 million.

Have You Been Injured by a Negligent Physician?

If you or your child has recently suffered due to the negligent medical care provided by a physician or any other medical professional, you may be entitled to monetary compensation to help you cope with what you have been through as well as what lies ahead. The dedicated medical malpractice and birth injury attorneys at the Maryland and Washington D.C. based law firm of Wais, Vogelstein, Forman, Koch & Norman have decades of combined experience representing those injured by negligent medical providers and know that it takes more than just legal knowledge to succeed. These cases can extremely emotional, and we understand that you represent more than just your injuries. Call (410) 567-0800 today to speak with a compassionate and dedicated attorney about your case.