Earlier this year in Winnebago County, Illinois, a former police lieutenant received a favorable jury verdict after he lost his leg due to a doctor’s negligence. According to one local news report, the jury hearing the former police officer’s case deliberated for about five hours before returning a $3.1 million verdict in his favor. 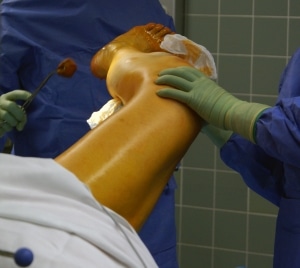 Evidently, the former officer had a history of peripheral vascular disease in his lower extremities, and he was admitted to the hospital with dizziness, weakness, and suspected gastrointestinal bleeding. After consulting with one of the defendant doctors, a boot was placed on his foot to help his condition. However, tests at the time revealed that the patient had only 41% blood flow in his leg.

As a result of the boot being placed on his foot, the blood flow in his foot decreased further, resulting in necrotic tissue that required below-the-knee amputation. Later, it was determined that a full-leg amputation was necessary.

The plaintiff’s theory of the case was that the defendant doctor, who was a general surgeon, should have consulted with a vascular surgeon familiar with the plaintiff’s specific disease before placing the boot on the plaintiff. Had the doctor done so, the plaintiff claims that he may still have his leg today.

Proving Medical Malpractice
Proving a case of medical malpractice is easy in theory but often complex in reality. Often, the testimony of an expert in the specific area of medicine involved is necessary to explain why and how the defendant was negligent. Therefore, in all but the rarest medical malpractice cases, having an experienced medical malpractice attorney is all but a necessity.

A dedicated personal injury attorney familiar with medical malpractice cases will be able to understand what kind of expert is needed in order to effectively communicate the failings of the defendant doctor to the judge or jury. This is of critical importance, since the expert witness will essentially be the person explaining the case to the jury in terms they can understand.

If you or someone you care about has recently been the victim of a medical malpractice incident, you may be entitled to monetary damages. Such damages may include amounts designed to compensate you for lost wages, past and future medical expenses, and any pain and suffering caused as a result of the incident. To learn more, and to speak to a dedicated Maryland malpractice attorney about your case, call (410) 567-0800 to set up a free initial consultation.