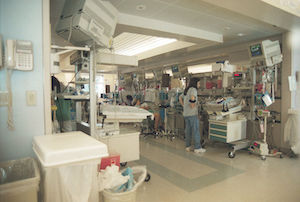 The parents of a child born in severe respiratory distress, who now suffers from cerebral palsy, sued the hospital, claiming vicarious liability for an obstetric nurse’s negligence. They alleged multiple breaches of the nursing standard of care. After a jury ruled against the plaintiffs, the state supreme court considered the sole issue of whether the trial court’s instruction to the jury regarding one of the alleged breaches correctly applied a community, rather than a national, standard of care. It affirmed the lower court judgments in Bates v. Dodge City Healthcare Group.

The mother, 34 to 35 weeks pregnant and believing that she was in labor, went to Western Plains Regional Hospital in Dodge City, Kansas on the morning of December 2, 1996. Hospital records show that she was admitted at 7:20 a.m. An obstetric nurse started a fetal heart monitor, which initially showed that the fetus was doing well. The nurse called the woman’s doctor at 7:40 a.m. to inform him that his patient was at the hospital.

The fetal heart monitor reportedly began showing “prolonged decelerations” in the fetal heart rate beginning at 7:42. This can cause decreased blood flow to the fetus’ brain, which can cause anoxic injuries. The nurse called the doctor again at 8:10 a.m. and told him to come to the hospital immediately. He did not arrive until 8:38, at which time he ordered an immediate emergency C-section. The child was delivered at 9:11 a.m. She did not breathe for her first five minutes of life and spent a month in a neonatal intensive care unit. She suffers from cerebral palsy and severe spastic quadriplegia with seizure disorder.

The parents claimed that the mother suffered a placental abruption, which caused the decelerations and compromised the fetus before the nurse told the doctor to come to the hospital. They sued the hospital, alleging respondeat superior liability for the nurse’s negligence. They claimed 12 breaches of the nurse’s standard of care, including failure to “promptly assess” the mother and the fetus upon her arrival, failure to recognize the symptoms of placental abruption, and failure to activate the hospital’s chain of command. A jury found in favor of the hospital, and an appellate court affirmed the verdict. The Kansas Supreme Court granted the parents’ petition for review on the single issue of the jury instruction regarding the nurse’s alleged failure to activate the chain of command.

The jury instruction in question applied a standard of care based on the community in which a nurse practices. The plaintiffs claimed that the trial court erred by issuing this instruction, since the other instructions applied a national standard. The state supreme court disagreed. While many elements of the standard of care can apply uniformly across the country, the court found that the details of a hospital’s chain of command may vary significantly from place to place. A plaintiff’s expert, the court noted, conceded that his hospital in Denver, with 100 OB/GYNs on staff, had a different chain of command than the defendant, which had two OB/GYNs. The court held that a community standard was appropriate for this issue.

The birth injury lawyers at Wais, Vogelstein, Forman, Koch & Norman have more than 100 years of cumulative experience representing people in Maryland and Washington, D.C. who have suffered injury due to the negligence of doctors, nurses, and other medical professionals. Please contact us today online, at (410) 567-0800 to schedule a free and confidential consultation to discuss your case.