Earlier this month, the New York Court of Appeals, which is the highest appellate court in its jurisdiction, decided the case of Walton v. Strong Memorial Hospital. The Court disagreed with the ruling of two lower courts and reversed the dismissal of the plaintiff’s lawsuit against a hospital for leaving a catheter in his heart during a 1986 surgery, when he was three years old. 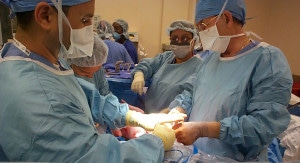 The trial court and intermediate appellate division determined that the object left in the patient was a “fixation device” and not a “foreign object” as defined by statute, and the plaintiff was therefore required to file his lawsuit within 10 years of the hospital’s alleged failure to remove the device. Ten years is the statute of limitations for standard medical malpractice actions in New York for incidents that occur while a plaintiff is an infant. If the courts had agreed with the plaintiff that the catheter was a foreign object, the statute of limitations would have required that the plaintiff file his lawsuit within one year of discovering the object, which he had done.

In May 1986, the plaintiff underwent surgery at the defendant hospital to correct a heart malformation. During the surgery, the medical staff inserted two catheters to record the pressure within the patient’s arteries during and shortly after the surgery. Before the patient was released from the hospital, the catheters were supposed to have been removed. A nurse’s progress note regarding the removal of the catheters on his medical chart noted that “the left atrial line possibly broke off with a portion remaining in patient.” The progress note was the last mention of any object left in the plaintiff’s body until he had an exploratory surgery in December 2008 after having unexplainable heart attacks and a stroke. Two pieces of the catheter were successfully removed on December 18, 2008. The plaintiff filed a New York medical malpractice lawsuit against the defendants in November 2009.

The Defense Succeeds in Dismissing the Lawsuit
In response to the plaintiff’s complaint, the defendants moved to dismiss, arguing that a catheter is a “fixation device” that was intentionally inserted into the patient’s body and not a “foreign object.” New York and most other states have what is known as a discovery rule regarding malpractice actions based on foreign objects being negligently left in a patient’s body during a surgery. The discovery rule overrides the standard statute of limitations, mandating that a patient has one year from the date that they discover (or should have discovered with reasonable care) that a foreign object was left in their body to file a lawsuit.

The trial and intermediate appellate courts agreed with the defense, finding that the legislature purposely excluded as foreign objects devices that were intentionally placed inside of a patient as part of the surgery, presumably in an effort to keep medical malpractice insurance premiums lower. The lower courts looked to other cases decided by the Court of Appeals and determined that the catheter pieces were not “foreign objects,” the case was not subject to the discovery rule, and it was dismissed.

The Court of Appeals Reverses
When the case reached the Court of Appeals, the justices were forced to reconcile the legislature’s clear and intentional removal of fixation devices and intentionally placed medical materials from the application of the discovery rule, with the obvious feeling of injustice that the dismissal of the plaintiff’s complaint had left with most people involved. The Court managed to distinguish the catheter from other fixation devices (such as stents or clamps), and it ruled that since the medical staff botched the removal of the catheter three days after the surgery, it was never intended to be there in the first place, and the discovery rule does apply. The lower decisions were reversed, and the plaintiff will be able to have his claim heard.

If you or a loved one has been the victim of medical malpractice in Maryland or any other state, the timing of your lawsuit can be the difference between fair compensation for your injuries and receiving no help at all. Keep in mind that statutes of limitations vary depending on the state where the action is filed. Often, there are special rules relating to the statute of limitations, and there are exceptions that may be applied to allow the filing of cases later than you may think. It is best for victims to contact an attorney as quickly as possible after malpractice may have occurred. It is always easier to file the lawsuit before the standard statute of limitations expires than to argue why an exception should be applied. Malpractice cases can be complicated, but the experienced malpractice attorneys at Wais, Vogelstein, Forman, Koch & Norman can help make it easier. Our dedicated medical malpractice lawyers represent victims of medical malpractice nationwide. At Wais, Vogelstein, Forman, Koch & Norman, we accept clients in most medical malpractice cases, including foreign objects left in the body during surgery. Call us today at (410)998-3600 or contact us online for a free consultation