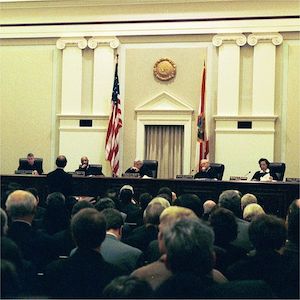 Several states, including Maryland, have passed laws imposing caps on noneconomic damages in personal injury lawsuits. Maryland sets a lower cap for medical malpractice cases than other types of injuries. The practice, known informally as “tort reform,” has been highly controversial. A wrongful death lawsuit brought in Florida, Estate of McCall v. United States, challenged the constitutional basis of these laws. While the Eleventh Circuit Court of Appeals found no violation of the U.S. Constitution, it certified a question to the Florida Supreme Court regarding that state’s constitution. Florida’s high court recently ruled that the cap on noneconomic damages in wrongful death cases violates the state constitution’s equal protection clause.

Noneconomic damages consist of nonpecuniary losses suffered by an injured person, such as pain and suffering, mental anguish, and disfigurement; or losses suffered by a close family member, such as loss of consortium. Maryland’s damage cap in medical malpractice cases increases every January 1. The cap is $740,000 in 2014, with a maximum of $925,000 for multiple claimants. Florida’s caps are set at $500,000 for medical malpractice cases, increased to $1 million for wrongful death claims.

The lawsuit was brought by the parents and infant son of a woman who died due to complications from a caesarian section in 2006. She was treated by Air Force medical staff at a private Florida hospital, so the family sued the U.S. government in federal court under the Federal Tort Claims Act. After a bench trial, the court held that the government was liable for $980,462 in economic damages and $2 million in noneconomic damages. Because of the damage cap, however, it cut the noneconomic damage award in half to $1 million.

The plaintiffs argued on appeal that the Florida damage cap statute violates the Equal Protection Clause of the Fourteenth Amendment and the Takings Clause of the Fifth Amendment to the U.S. Constitution. They also claimed violations of the Equal Protection and Takings Clauses of the Florida Constitution. The Eleventh Circuit affirmed the reduced damage award and rejected three of the four constitutional arguments. Because no Florida case had yet considered how damage caps the state’s Equal Protection Clause, it certified the question to the state’s Supreme Court.

The Florida Supreme Court ruled that the state’s damage cap on medical malpractice cases involving wrongful death violate equal protection. The damage cap saves “a modest amount for many by imposing devastating costs on a few,” it noted in a lengthy order that resulted from nearly two years of review. It held that the damage cap is not rationally related to the law’s stated goal of relieving a medical financial crisis.

The applicability of this ruling to other states is uncertain. The two damage cap statutes are not entirely equivalent, and the ruling might only apply to the provisions for wrongful death cases. Furthermore, Florida’s constitution has an express equal protection clause in Article 1, Section 2, but Maryland’s constitution does not. Equal protection is inferred from Article 24 of the Declaration of Rights, as the Maryland Court of Appeals held in Atty. General v. Waldron in 1981.

For more than two decades, Wais, Vogelstein, Forman, Koch & Norman’s medical malpractice attorneys have helped Maryland patients and their families recover damages for injuries caused by the negligence of doctors and other medical professionals. To schedule a free and confidential consultation to discuss how we may assist you, please contact us today online, at (410) 567-0800.