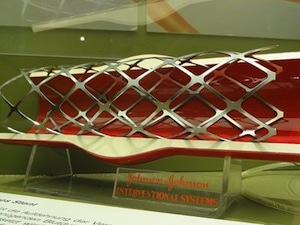 Several weeks into trial in a Baltimore courtroom, the parties to a medical malpractice lawsuit reached a settlement. The plaintiffs alleged that a doctor performed hundreds of procedures to implant heart stents that were not medically necessary at St. Joseph Medical Center in Towson, Maryland. The settlement will reportedly resolve the case for about 250 plaintiffs. Since the details of the case came to light, the doctor lost his job and his medical license, and the case has raised questions about the effectiveness of hospital peer review procedures.

Dr. Mark Midei reportedly worked at St. Joseph from 2007 to 2009. During that time, he allegedly placed more than five hundred stents in patients who did not need them. A stent is a small tube made of metal or fabric mesh, used to support the inner walls of weakened or blocked arteries. Stents are typically used after a procedure known as angioplasty, but can also be used in other situations. According to another medical doctor who wrote about the case, Midei was accused of misreading catheterization films, possibly intentionally, and recording a higher rate of artery blockage than actually existed. As a result, patients whose arteries did not require stents received them anyway. St. Joseph notified more than five hundred patients in 2010 that they may have received unnecessary stents. Lawsuits followed not long afterwards.

According to the New York Times, the hospital conducted a review in April 2009 that examined 1,878 cases, beginning with January 2007, and identified 585 patients whose stents might not have been necessary. Midei reportedly installed thirty stents manufactured by Abbott Laboratories during one day in the summer of 2008. Eventually, the U.S. Senate Finance Committee commenced an investigation, reviewing documents from the hospital and Abbott. It also found that 585 patients’ stent procedures may have been unnecessary. Medicare paid $3.8 million for those procedures, the committee found, out of total charges of $6.6 million. During the course of the various investigations and lawsuits, the hospital paid millions of dollars in fines, Midei unsuccessfully sued the hospital for defamation, and the state of Maryland revoked his medical license.

In early May 2013, 247 plaintiffs, former patients accusing Midei of medical malpractice, settled their claims against him, St. Joseph, and the company that owned St. Joseph when the stent procedures occurred. Twenty-one of the plaintiffs were in the middle of a trial in Baltimore County Circuit Court when the settlement was announced. The total settlement amount may be as much as $35.25 million, according to the Baltimore Business Journal. The court appointed a “neutral representative” to evaluate the plaintiffs’ claims and determine how to distribute the settlement amount. Most of that amount would come from St. Joseph and its former owner, while Midei’s insurer would contribute $1.5 million.

The medical malpractice attorneys at Wais, Vogelstein, Forman, Koch & Norman fight for the rights of Maryland patients who have suffered injuries due to negligence by doctors and other medical professionals, hospital errors, mistakes during surgery, medication errors, and other breaches of a medical professional’s duty of care to a patient. They have obtained verdicts and settlements for their clients in the millions of dollars, and are committed to provided the best possible legal representation. We are available 24/7 and can visit you in your home or at the hospital. Please contact us online, at (410) 567-0800 in Maryland, or at (888) 952-9669 in DC to schedule a free and confidential consultation.