Earlier this year, the major medical group Kaiser Permanente was found liable in a medical malpractice action and was ordered to pay the victim of the medical negligence over $28 million. According to a report by a CBS affiliate based out of Los Angeles, the medical group was found to have been negligent in the treatment of a woman who first came to the hospital experiencing back pain. 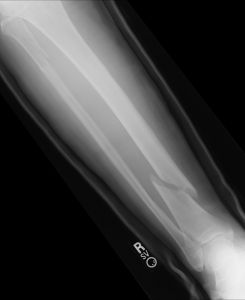 Evidently, the then-16-year-old girl was experiencing worsening back pain when she went to a Kaiser Permanente hospital. Despite claims that she was suffering severe back pain, physicians at the hospital refused to order an MRI. However, after four more months of excruciating pain, it was discovered that the girl had an aggressive form of cancer in her pelvis that had begun to spread to her spine.

As a result of the delayed diagnosis, the girl had to have her entire right leg, part of her pelvis, and part of her spine amputated. In the woman’s complaint, she alleged that the hospital’s negligence in refusing to order the MRI delayed her diagnosis, which then resulted in the amputation. The hospital had two of the treating physicians testify that neither recalled the girl or her mother specifically asking for an MRI. They also said that it was likely that the cancer had already spread to her spine by the time she came to the hospital for treatment. However, after a four-week trial, a jury agreed with the woman and awarded her over $28 million.

Failure-to-Diagnose Medical Malpractice Cases
All physicians have a duty to adequately care for their patients. Part of a physician’s duty is to accurately diagnose their patients’ medical conditions. Of course, not every medical condition can be caught in time, even with a physician’s diligence. However, in some cases a physician fails to conduct a medical test that is commonly used in the field to diagnose certain illnesses. Failure to administer a common test can be construed as negligence if the patient is exhibiting symptoms that give rise to a condition that the test may diagnose.

When a physician fails to diagnose a serious medical condition, it may be too late to obtain effective treatment once the condition is discovered. If this is the case, the physician may be liable for damages caused by his or her negligence. How these damages are measured vary widely depending on the circumstances of the misdiagnosis. Contact a dedicated medical malpractice attorney to learn more about medical malpractice cases.

If you or a loved one has recently been the victim of medical negligence, you may be entitled to monetary compensation. Depending on the specific facts of what happened, you may be able to recover damages for past and future medical expenses, lost wages, and any pain and suffering you have experienced. To learn more, call (410) 567-0800 to set up a free consultation with a dedicated medical malpractice attorney.