Earlier this year, legendary actress and comedienne Joan Rivers died as a result of a medical procedure called an endoscopy. In a recent news article by the New York Daily News, Rivers’ daughter, Melissa Rivers, has decided to file a multi-million dollar wrongful death suit against the clinic that performed the surgery leading to her mother’s death. 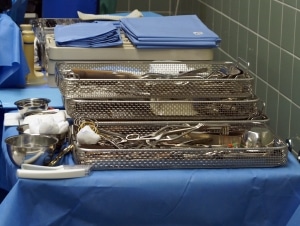 Evidently, Joan Rivers went into the clinic with complaints of hoarseness, potentially the result of gastroesophageal reflux disease. While she was at the clinic, one of the physicians there wanted to take an unplanned biopsy from her vocal cords in order to further diagnose her condition.

The taking of the biopsy required that Rivers undergo an endoscopy, which is a routine procedure by where a small tube is inserted down the patient’s throat. As a part of the endoscopy, the patient is usually sedated with Propofol, a potent sedative.

During the procedure, Rivers stopped breathing and eventually went into cardiac arrest. The medical examiner ultimately determined that her cause of death was “anoxic encephalopathy due to hypoxic arrest during laryngoscopy and upper gastrointestinal endoscopy with Propofol sedation.” It was also determined that her death was a “therapeutic complication.”

These reports led Rivers’ daughter to seek additional answers by filing a wrongful death suit against the clinic as well as against the individual physician who performed the endoscopy. As a part of the suit, the clinic must preserve all medical and other records relating to the treatment of Rivers, since these may become evidence down the road at trial.

Medical Malpractice and Wrongful Death Suits in Maryland
The suit brought by Melissa Rivers is a medical malpractice suit, or a lawsuit that alleges negligence by a medical professional. While a malpractice suit is still based in the general law of negligence, due to the complexities involved in the field of medicine, malpractice suits have additional components to them.

Often, medical malpractice claims must be supported by an expert opinion even before they are even allowed to go to trial. This prevents non-meritorious suits from using up valuable judicial resources.

Given that there are additional requirements in medical malpractice suits, it is highly advised that if you have a potential case, you should secure the assistance of a dedicated and skilled medical malpractice law firm before making any important decision regarding the status of your case.

Have You Been Injured by a Physician’s Medical Negligence?

If you or a loved one has recently been injured by the negligence of a medical professional, you may be entitled to monetary compensation through a medical malpractice action. To learn more about medical malpractice claims, and what must be proven in order to succeed, contact one of the dedicated attorneys at the Maryland medical malpractice firm Wais, Vogelstein, Forman, Koch & Norman, LLC. The dedicated attorneys at WVF will help you navigate the complex process of the justice system and do everything they can to help you get what you deserve. Call (410) 567-0800 today to set up a free consultation.