Most of us assume that our doctors are there to care for us, and further assume that any recommendations they may make are just recommendations. However, one Florida woman has recently been threatened by her doctors that no matter what she decides, they will only perform a Cesarean section (C-section) when it comes time for her to give birth. 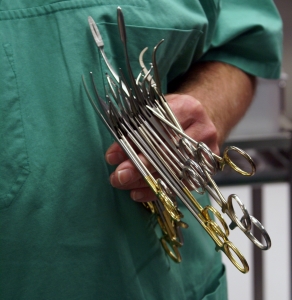 According to a report by Ladybud.com, the woman at issue is giving birth to her fourth child and has had three C-sections in the past. She desires to have her fourth child vaginally or, as doctors call it, a “Vaginal Birth After Cesarean” (VBAC).

Both C-sections and VBACs carry risks, the woman explains, but she believes that she should have the right to choose which set of risks she takes on. One study estimates that those women undergoing a fourth C-section have a 1 in 8 chance of having a serious birth complication. On the other hand, the American College of Obstetricians and Gynecologists claims that there is a 60% to 80% success rate with VBAC procedures.

Regardless of the risks involved, one would hope that a hospital or a physician would not perform a surgery on a patient to which he or she does not consent. Furthermore, the woman is not being unreasonable and has told administrators that if, during the birthing process, it becomes evident that a C-section is required, she would gladly consent. She merely wants to have her wishes respected and have the physicians attempt a VBAC.

The woman eventually brought a suit in federal court in hopes of preventing the hospital from performing the unwanted procedure. However, since she has chosen to give birth at the hospital the federal judge hearing the case dismissed her complaint, explaining that the woman has no “right to compel a physician or medical facility to perform a medical procedure in the manner she wishes against their best medical judgment.”

In response, the woman claims that she is the one attempting to avoid a compelled procedure, and that a normal vaginal birth is not technically a “procedure.”

This brings up the argument that many patients’ rights activists frequently make: that the threat of medical malpractice should not dictate which surgeries a doctor is willing to perform on a patient. The case law certainly supports the proposition that pregnant women have the same constitutional right to refuse medical care that the rest of us have. What the appellate courts do with this case remains to be seen, however.

Are You in Need of an Attorney?

If you or your child has been injured in the birthing process, you should speak to a skilled birth injury attorney about your case and the possibility that you may be entitled to monetary damages. In many cases, physicians make errors or lapses in judgment that can result in serious injury or death to the mother or child. To learn more about the laws that allow the innocent victims of these accidents to recover, click here or call (410) 567-0800 to schedule a free initial consultation with an attorney today.